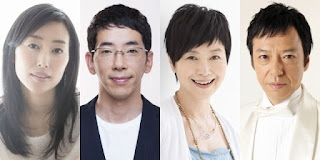 The supporting cast line-up for Tokai TV & WOWOW Spring 2017 drama "Hanzai Shoukougun Season 2" starting on 11 June at 10pm on Sundays via WOWOW has been announced. The drama is based on the three-part "Shoukougun" novel series by writer Nukui Tokuro where "Shissou Shoukougun" (Disappearance Syndrome) and "Yuukai Shoukougun" (Kidnap Syndrome) will form Season 1 while "Satsujin Shoukougun" (Murder Syndrome) will be made into Season 2.

Tamayama Tetsuji plays the role of Muto Takashi who is a former police detective using illegal methods to solve cases which are difficult to handle by the police while Tanihara Shosuke plays Muto's buddy and a police detective Kaburagi Wataru and Watabe Atsuro plays Tamaki Keigo who takes charge of the special missions given to Muto. While exploring the lives of these men, the topic of whether revenge is right or wrong is discussed in this suspense drama.

In Season 2, Kaburagi's past where his girlfriend was killed when he was still underage and his subsequent transformation into a professional killer to take revenge for her is revealed as he gets a new assignment to kill someone. Kimura Tae plays Kaburagi's old friend Yabuki Kyoko, a member of "Shounen hanzai wo kangaeru kai" which is a group that researches on youth crime and has a similar past as him (her boyfriend was killed when she was still underage). Itao Itsuji plays Makita Hirofumi, the leader of the group. The two of them will begin appearing in the last episode of Season 1 to be shown on 27 May.

Nomaguchi Toru will play Kajihara Tomoyuki who has a strong hatred for juvenile criminals as his son died due to the physical torture inflicted by his classmate. Tezuka Satomi plays a nurse Kojima Kazuko who is on the search for a donor as her son needs an organ transplant.