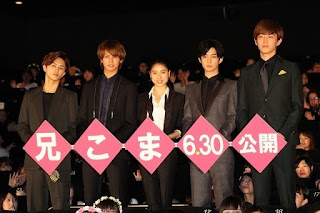 The completion screening event of new movie "Ani ni aisaresugite komattemasu" was held at Shinjuku Picadilly on 24 May which was attended by cast members Tsuchiya Tao, Katayose Ryouta, Chiba Yuudai, Kusakawa Takuya and Sugino Yosuke. The movie will be shown in cinemas from 30 June.

In this movie directed by Kawai Hayato, Tsuchiya plays the lead character Tachibana Setoka while her elder brother Haruka is played by Katayose and her first  love Serikawa Takamine is played by Chiba Yudai. Setoka is a senior high school student who is unpopular with guys and has 12 failed confessions of love to date. Fortunately, she is doted on by her cool elder brother Haruka. One day, Haruka comes to know that his younger sister is actually not related to him by blood but chooses to keep it as a secret. Just then, Setoka's first love Serikawa who is a rich medical intern now and has a malicious tongue, reappears after they've not met for a few years and the two of them become close again. Soon after, Setoka suddenly experiences newfound popularity with several guys and faces the dilemma of who to choose for the first time in her life.

Tsuchiya attended the event dressed in a tuxedo so as to blend into the lineup of handsome guys surrounding her. In response, Chiba praised her for looking very cool while Katayose commented that the number of handsome guys increased due to her presence. Reflecting on the filming, although it was done under a very tight schedule, she was very pleased to be able to make such a great love comedy with her "elder brothers" and hoped that the audience would spread the word by writing about the movie on their social media accounts or talking about it in school.

During the event, 5 female members of the audience were selected at random to take part in the heart-stopping lines contest where the cast would take turns saying lines which would send their hearts fluttering. Chiba began by placing his hands on the shoulders of his target and pulling her towards him before saying that a real kiss is more than this. Next, Kusakawa told his target that she should give up on other men because he's right in front of her. When it was Katayose's turn, he put his face near his target and asked if he could hug her. Last but not least, Tsuchiya asked her target if she could like her for real which made her so shy that she ended up hugging the latter in embarrassment. The audience squealed in excitement each time they heard the actors speak their lines.

The drama version of this movie shown via NTV recently ended its run with a high 3.4% for its finale despite the fact that it was shown in a late-night timeslot.