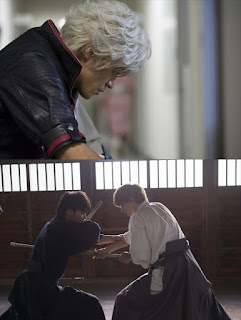 The real-life drama version of "Gintama" will be shown via dTV from 15 July which is one day after the release of the movie version featuring Oguri Shun and directed by Fukuda Yuichi in cinemas. As per the movie version, Oguri will still play the lead character Sakata Gintoki in the 3-episode drama version alongside members of Shinsengumi including Kondo Isami (Nakamura Kankuro), Hijikata Toshizo (Yagira Yuuya) and Okita Soji (Yoshizawa Ryo). The three episodes will be released at one go on the same day.

Meanwhile, the voice actors who starred in the anime version of "Gintama" will be appearing in a 12-part programme where they will talk about the highlights of the story in the manga and anime versions. This will also be shown via dTV from 1 July and released progressively.

For those who are interested in checking out these programmes, please go to the Gintama special site here.