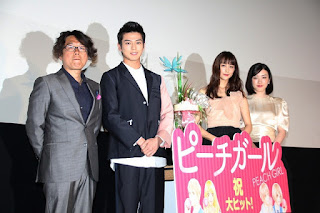 The first-day-screening event of new movie "Peach Girl" was held at Marunouchi Picadilly on 20 May which was attended by the director Shintoku Koji and cast members Yamamoto Mizuki, Inoo Kei, Mackenyu and Nagano Mei. With regard to their movie being finally ready to meet the public, Inoo expressed his joy while Yamamoto commented that they spent a whole year preparing this movie and hoped that the fans will like it.

When asked if there was anything that they would like to say but could do so now, Yamamoto mentioned that there were some flashback scenes of Momo and Touji back in junior high where she had to wear a sailor-style uniform and play baseball but all these scenes were cut from the movie. When she asked the director about it, he said that the final result didn't turn out that convincing i.e. they didn't look like junior high students. As such, she "complained" that he should have realised it before they filmed the scenes and said that she felt sad about the cut scenes. Mackenyu also echoed the view that those scenes were very nice which led the director to promise to include them in the making-of footage when the DVD is released.