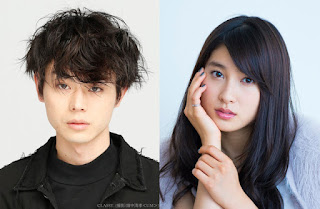 Suda Masaki and Tsuchiya Tao will be starring in the new real-life adaptation movie "Tonari no Kaibutsu-kun" (The Mr. Monster beside me) which will be shown in cinemas next year. The movie is based on the same-titled manga by Robico which was serialised in "Gekkan Dessert" between 2008 and 2014 and has sold more than 5 million copies to date. This will be the last movie where Suda appears in a school uniform.

Suda plays the role of Yoshida Haru who is an unpredictable troublemaker at school while Tsuchiya plays a cold-blooded girl Mizutani Shizuku sitting beside him who's only concerned about doing well in her studies. The both of them who have no friends, become each other's first friend before experiencing a number of firsts in their lives such as first love, first kiss, first quarrel and first love triangle.

Suda who read the original manga after getting the offer, commented that his character Yoshida is a pure guy who's clumsy and cute at the same time. He will try his best to show the charm of the original manga while playing this character. As this is his last appearance in a school uniform, he will enjoy himself to the fullest in this movie. Although Suda had met Tsuchiya before on variety programmes, this will be their first collaboration in a movie. Suda said that she is a perfect fit for Shizuku and hopes to be able to match up to her physical strength as he has not been exercising a lot recently. On the other hand, Tsuchiya expressed her gratitude to be given such a valuable opportunity to play a very different character this time. She is also eager to work with Suda who is an actor representative of their generation so she is even more excited to collaborate with him in this movie.