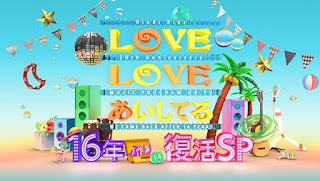 FujiTV music programme "LOVE LOVE Aishiteru" hosted by KinKi Kids and Yoshida Takuro will be back as a SP for the first time in 16 years as it celebrates the 20th anniversary of the duo since they made their debut on 21 July. Besides the hosts, regular cast members such as Sakazaki Kounosuke and Shinohara Tomoe will be appearing in the SP which was pre-recorded on 14 May. The programme had invited many guests during its run from October 1996 and March 2001 to perform songs with the regular cast members. KinKi Kids' members learnt how to play the guitar from Yoshida and even wrote songs which were featured in the programme.

The opening of the SP was marked by the singing of KinKi Kids' hit son "Zenbu dakishimete" which was written as the show's theme song by Yoshida. Guest stars for the SP include Suda Masaki who is making his debut as a solo singer next month and freelance announcer Furutachi Ichiro who used to the host of FujiTV music programme "Yoru no Hit Studio" between 1985 and 1988.