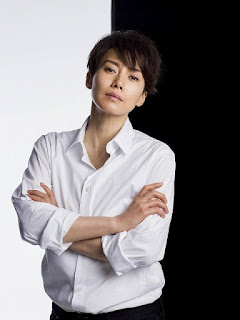 Nakatani Miki will be starring in the new WOWOW drama "Kataomoi" (One-sided love) which is based on the same-titled novel by Higashino Keigo. The drama consists of 6 episodes and will be shown this autumn.

Nakatani plays the lead character Hiura Mizuki who is a woman with gender identity disorder. After a reunion dinner in the summer of 2017 with her friends in the American football team which she used to be the team manager for, Mizuki admits to her teammates that she had murdered someone and that she is living as a man named Kanzaki Mitsuru now and works at a club in Ginza. Faced with such a shocking revelation, Mizuki's friends try to find the truth behind her revelation in a bid to protect her. However, as they gradually unravel the truth, they are faced with the harsh truth and how to decide what's best for everyone. The meaning of "one-sided love" in the title will also be explained as the story progresses.

Nakatani commented although this is the first time she is acting in a Higashino work, the pressure is great because rather than volunteering to take on this role, she was given this heavy responsibility to play this difficult character. In order to look convincing as a man, Nakatani cut her hair by 15cm and even went through physical training for 2 months but she will also have to show the sadness of how Mizuki's efforts may end up in naught as she cannot become a man completely.

Higashino who has 5 works adapted by WOWOW to date i.e. "Shukumei", "Genya", "Bunshin", "Henshin" and "Kakkou no tamago wa dare no mono", said that he was surprised that there was finally someone who dared to take on this difficult topic featured in "Kataomoi" as it is something which the current society has yet to find answers to. As such, he hoped that the drama will bring more attention to this issue. He also praised Nakatani for having the courage to take on such a role and expressed his joy in seeing how she will play Mizuki.

Filming began from 6 May.