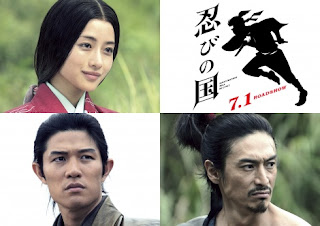 Arashi will be singing the theme song for the new movie "Shinobi no Kuni" starring Ohno Satoshi which will be shown in cinemas from 1 July. The song titled "Tsunagu" will be the group's 52nd single and their first movie theme song in four years since 2013's "Platina Data". The fast-paced song begins with a "battle" between the guitar and shamisen and is featured in the latest teaser trailer released today.