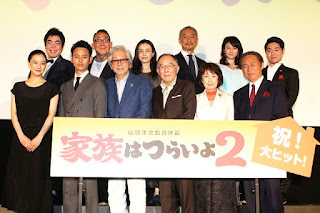 The first-day-screening event of new movie "Kazoku wa tsurai yo 2" was held at Marunouchi Picadilly on 27 May which was attended by the director Yamada Yoji and cast members Hashizume Isao, Yoshiyuki Kazuko, Nishimura Masahiko, Natsukawa Yui, Nakajima Tomoko, Hayashiya Shozo, Tsumabuki Satoshi, Aoi Yui, Kobayashi Nenji, Nakamura Takanosuke and Tokunaga Yuuki. This is the third time that the main cast has worked together after the movies "Tokyo Kazoku" and "Kazoku wa tsurai yo" shown last year which touched on divorce between elderly couples. This time, the movie will be talking about serious themes in a comedic manner such as the voluntary surrendering of driving licences by the elderly and the phenomenon of an isolated society where people have weak personal links with one another.

With response to calls from the audience asking for Part 3, Hashizume revealed that plans are already underway for a sequel but whether it will materialise will depend on the performance of Part 2. Tsumabuki and Aoi also chipped in to ask the audience to spread the word about their movie so that their wish of making Part 3 can be realised.

When asked about the question of when they feel that fate is at work, Yoshiyuki revealed that she had played a married couple with Hashizume for 6 times to date of which four times were in a Yamada work. However, despite so, Hashizume would only pay attention to the young girls and ignore her all the time. In response, Hashizume said that they have been colleagues for so long even in roles where they weren't married to each other to which Yoshiyuki retorted that it's strange that they are that close but still do not have each other's phone numbers. Meanwhile, Tsumabuki said that he had played lovers with Aoi many times and "married" her twice but they have never had a kissing scene to date. Although Tsumabuki had hoped for a kissing scene now that his character was married to Aoi's, Yamada jokingly commented that married couples don't kiss so Tsumabuki can give up hoping for such a scene even if there's a sequel in future. As for Aoi, she revealed that she had been rejected during an audition for a role in Yamada's movie "Gakkou" when she was in her teens and this made her very dejected then. Just when she was seriously contemplating quitting, she got an offer to appear in his movie "Otouto" which made her feel like they were somewhat bonded by fate.