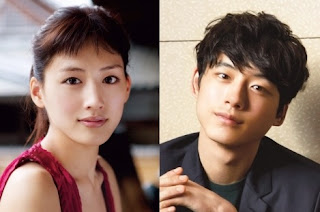 Ayase Haruka and Sakaguchi Kentaro will be joint leads in the new movie "Konya, Romance Gekijou de" (Tonight at the romance theatre) which is written by novelist and scriptwriter will be directed by Uyama Keisuke and directed by Takeuchi Hideki. Although Ayase and Sakaguchi had appeared in the movies "Umimachi diary" and "Kodaike no Hitobito" together before, they had no scenes together so this is their first official collaboration. The script was written with the two of them in mind before the offer was made to them. Filming began at the end of April and will wrap up by early June. The movie is scheduled to be shown in cinemas next year.

The fantasy love story features Sakaguchi as a young man named Kenji who dreams of becoming a movie director and Ayase as Miyuki, a "princess" who appears in monochrome movies and is the woman of Kenji's dreams. Although the two has no likelihood of meeting, Miyuki suddenly comes out from her monochrome world into the colourful current era and appears in front of Kenji which leads to them falling in love with each other. In the movie, Ayase who will be sporting an image similar to Audrey Hepburn in "Roman Holiday", will be wearing at least 25 different outfits.