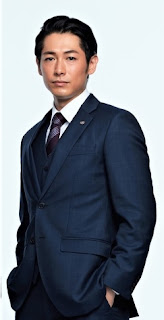 Dean Fujioka will be appearing in the real-life adaptation movie "Soratobu Taiya" based on the bestseller novel by Ikeido Jun and features TOKIO's Nagase Tomoya as the lead. This will be the first collaboration between Nagase and Fujioka.

Nagase will be playing the lead character Akamatsu Tokurou who is the president of a transportation company. One day, an accident involving his company's truck happens where a tyre comes loose and causes a housewife's death. This results in a lack of trust and wave of criticism directed at his company for alleged maintenance faults. However, when Akamatsu investigates the truck's structure as he suspects a problem, he finds out that the truck's manufacturer Hope Jidosha is hiding a critical recall issue. In order to protect his company, employees, family and seek justice for himself, he takes on Hope Jidosha which tries to conceal the truth.


Fujioka will be playing Sawada Yuta who is the customer strategy section chief of Hope Jidosha and will face off with Akamatsu who wants to prove Hope's wrongdoing. Although he is reluctant to entertain Akamatsu's request for a re-investigation, Sawada himself has doubts about the original investigation and does his own checks where he is then caught between his sense of justice and his responsibility as an employee of Hope.


Nagase praised his co-star for having no airs and a high level of concentration when filming. In addition, Fujioka is very approachable and Nagase feels that they have many things in common. On the other hand, Fujioka also said that Nagase is a perfect fit for the character Akamatsu since they are both passionate men. In the movie, there will be a confrontation scene which does not appear in the novel which both actors feel will be meaningful and significant to the story. Other than this, the two of them hardly have any scenes together.

Filming wrapped up in the end of April and post-production works are expected to be completed in this autumn. The movie will be shown in cinemas next year.

Hmmm... not sure about this even though I like Dean Fujioka. I saw the drama with Nakamura Toru and Tanabe Seiichi, which was really powerful and left a deep impression. But Nagase Tomoya... eh....