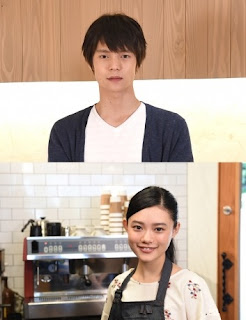 Kubota Masataka and Sugisaki Hana will be reprising their roles from previous TBS dramas based on Minato Kanae's novels in the ongoing TBS Spring 2017 drama "Reverse". Kubota will be playing Naruse Shinji again from the Autumn 2014 drama "N no Tame Ni" while Sugisaki will be playing Endo Ayaka from the Winter 2013 drama "Yakou Kanransha" where their characters' will appear alongside the characters in "Reverse". In the case of Naruse Shinji, he will be a regular customer at the bakery where Ochi Mihoko (Toda Erika) works at and he will be speaking the Sanuki dialect for the first time in a long while. On the other hand, Sugisaki will meet Fukase Kazuhisa (Fujiwara Tatsuya) at the company where he pays a visit to.

When Kubota got the offer, he was very excited about meeting the staff who also worked on "N no tame ni" with him. However, when he started acting, he got really nervous especially when it came to speaking in the Sanuki dialect. As for Sugisaki who played a teenager suffering from a huge change in temperament due to bullying at school in "Yakou Kanransha", she was eager to see how her role Ayaka would become now that she is an adult but she wasn't sure how she should act. When she started filming, the feeling came back naturally to her and she enjoyed the experience very much.