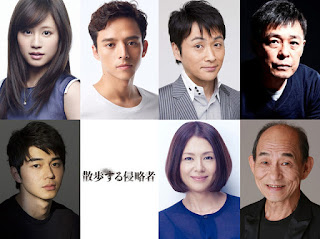 The supporting cast line-up of new movie "Sanposuru Shinryakusha" starring Nagasawa Masami & Matsuda Ryuhei has been announced. The movie is adapted by the director Kurosawa Kiyoshi from the same-titled 2015 stage play from theatre group Ikiume. Matsuda plays the role of Kase Shinji who has the habit of going on daily walks every evening but disappears without a trace for a few days. When he returns home, it is as if he has become an entirely different person which makes his wife Narumi shocked at his changes especially when he becomes very gentle and nice to her. Suddenly, Shinji tells Narumi that there will be an attack on Earth which is then followed by a series of strange happenings such as the mass killing of a family in the town they live in and the happening of weird events that disrupts the peaceful life they once had. Hasegawa Hiroki plays the role of a journalist Sakurai who follows the "invader" around as part of his job.

Maeda Atsuko will play Narumi's younger sister Asumi while Mitsushima Shinnosuke will be a hikkikomori young man Nanao who Shinji encounters while on his daily walks. Higashide Masahiro plays a pastor who Shinji meets while Unjash's Kojima Kazuya plays a police detective Kurumada investigating the mass killing case. Mitsuishi Ken plays Suzuki, the president of a company which has business dealings with Narumi, Koizumi Kyoko plays a doctor and Sasano Takashi plays a mysterious man Shinagawa.

The movie will be shown in cinemas from 9 September.