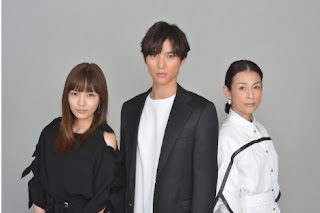 Fukushi Souta will be starring in the upcoming NTV Summer 2017 drama "Aishitetatte, Himitsu wa aru" (I used to love, there is a secret) which will begin its run from July on Sundays (timeslot not confirmed yet. The original concept of this drama is by music producer Akimoto Yasushi who last produced the 2005 TV Asahi drama "Chakushin Ari" starring Kikukawa Rei that is unrelated to his AKB girl groups.

Fukushi plays the lead character Okumori Rei who killed his father (Horibe Keisuke) in the summer of when he was in the third year of junior high school so as to protect his mother Akiko (Suzuki Honami) who suffered from domestic violence inflicted by her husband. In order to hide his crime, Rei and Akiko decided to bury the corpse in the back garden of their house, report him as missing and share this dark secret between themselves. Rei strives hard to become a lawyer without making friends or falling in love. 11 years later, the 26-year-old Rei meets Tachibana Sawa (Kawaguchi Haruna) in graduate law school and the two of them fall in love with each other. Although Rei has made up his mind to get married to Sawa with his mother's blessings, someone who seemingly knows about his secret sends an alarming message to him. Co-stars include Endo Kenichi who plays Sawa's father and is the chief prosecutor, Koide Keisuke who plays Sawa's elder brother at odds with his father, Okae Kumiko who plays Sawa's mother and tries to keep her family together, Suzuki Kosuke who plays a doctor in love with Akiko, Shirasu Jin who is a mutual friend of Rei and Sawa, Yamamoto Mirai who plays a teacher of Rei and Sawa, Emoto Tokio who is a paralegal assisting Sawa during her internship and Yashiba Toshihiro who plays a police detective investigating the disappearance of Rei's father 11 years ago.

Fukushi commented that this drama contains various elements such as romance and mystery and this is his first time acting in a mystery story so he hopes that viewers will look forward to watching this. As for working with Kawaguchi, he said that she is a perfect fit to play the cheerful Sawa and feels secure about working with her again. On the other hand, Kawaguchi expressed her anticipation at participating in this drama especially how her character develops in the story. As for Suzuki, she is eagerly anticipating working with her cute "son" and "daughter-in-law" in this drama.

Akimoto said that the key concept of the drama is how much you know about your lover. Everyone will have their own secrets but the extent of how much you can tolerate your own lover keeping secrets from you is something he would like the viewers to think about even if they have no romantic partner in their lives now.