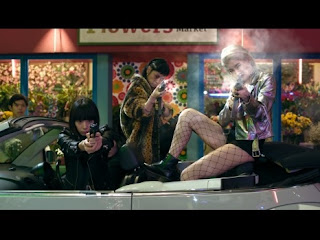 Kaho will be starring in the new Amazon original drama series "Tokyo Vampire Hotel" which will be directed by Sono Sion and shown exclusively via Amazon Prime Video from 16 June. The drama's cast lineup also includes Mitsushima Shinnosuke, Tomite Ami, Adachi Yumi and the director's wife Kagurazaka Megumi. Sion who had always wanted to do an original story about vampires and their right with human beings. Besides filming in the Nikkatsu studio in Tokyo, the location shooting was also done at the vampires' hometown in Transylvania and Turda both in Romania.

K (Kaho), a member of the orthodox vampire clan i.e. the Dracula family, lives at Hotel Requeim where young people gather underground to live on peacefully after witnessing the world being destroyed due to a nuclear explosion. The clan's arch rivals i.e. Corbin Family who call themselves Neo Vampires, include Yamada (Mitsushima), the Emperor Sisters (Adachi plays both roles) and Elizabeth Bathory (Kagurazaka) who need to keep killing human beings in order to survive. The two families fight over a mysterious 22-year-old girl Manami (Tomite) as K tries to protect her from harm.