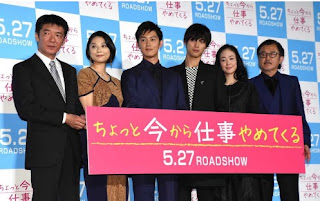 The completion screening event of new movie "Chotto ima kara shigoto yametekuru" was held at TOHO Cinemas Roppongi Hills on 9 May which was attended by the director Narushima Izuru and cast members Fukushi Souta, Kudo Asuka, Kuroki Haru, Koike Eiko and Yoshida Kotaro. The movie will be shown in cinemas from 27 May and take part in the Shanghai International Film Festival which will be held between 17th and 26th June.

The story features Kudo in the role of Aoyama Takashi, a young man who has just started his first full-time job and is so stressed by the tough sales targets set by his company and power harassment that he wants to commit suicide by jumping onto a railway track. However, in the nick of time, he is saved by a mysterious man named Yamamoto (Fukushi) who is very cheerful for no apparent reason and keeps speaking Kansai-ben to him. Through their interaction, Aoyama starts to feel the positive energy from Yamamoto rub onto him and gradually sees an improvement in his career. One day, Aoyama is shocked to learn that Yamamoto actually died three years ago due to a suicide.

With regard to their first collaboration in this movie, Fukushi remarked that Kudo is a very energetic and sporty guy since they first met and his impression of the latter has not changed at all even though they know each other better now. On the other hand, Kudo said that he was in awe when he first saw Fukushi and realised why girls are all so besotted with him.

In line with the movie's theme, the cast were asked what they would like to quit doing. Fukushi said that he's very shy in front of strangers and people who he hardly knows as he has very little confidence in himself. When he is the lead actor in a production, he feels the responsibility to become a leader on the set so would try to approach others and strike up a conversation. Upon hearing this, his co-stars teased him that this must be the reason why Fukushi only takes leading roles which led him to clarify that this is not what he means.