And so, this is probably why the ending of "Anata no ban desu" was "incomplete"... 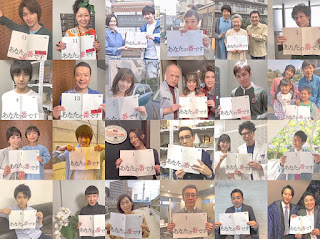 If this article is to be believed, there is a valid reason why the ending of "Anata no ban desu" was "incomplete". I have highlighted the key points here and tried to avoid posting any spoilers so you can read this without any worries:

- Despite the high rating achieved by the finale, NTV has been flooded with complaints on the phone and online because of many unanswered questions in the ending. It was estimated that more than 90% of posts and comments online were from dissatisfied viewers.

- Despite the real killer being arrested, the final moments of the finale hinted at more new mysteries and the presence of yet another mastermind.

- Apparently, this was done on purpose by NTV because there is supposed to be another 2-part special episode which will be streamed via its affiliate company Hulu on 23rd and 29th September. Akimoto Yasushi who conceptualised the story, will answer all the questions from the viewers in this programme.

- The producer of "Anata no ban desu" initially wanted to add a telop at the end of the finale saying that "the story will be continued on Hulu" but the NTV director in charge of programming was furious about this and objected to the idea. This was because this producer had created a big fiasco back in 2017 when the "real ending" of Summer 2017 drama "Aishitetatte, Himitsu wa aru" starring Fukushi Souta was shown on Hulu after the airing of the final episode. The director concerned was said to have scolded the producer for ignoring the interests of viewers and that this was wrong morally.

- Due to the absence of such a telop, the viewers were left with an "incomplete" ending with many unanswered questions causing a lot of confusion.
However, if the telop was included, this could have caused a bigger outburst from viewers and get NTV into trouble with BPO (Broadcasting Ethics & Program Improvement Organisation) for its overly aggressive tactics to make people sign up for Hulu just to watch the full ending.

- NTV is said to be bidding its time to find the right moment to make the announcement about the SP. Although fans would probably be glad to have the complete answer, they would probaly be eager to flood NTV with criticism over the way it is done as well.

Apparently, NTV still hasn't learned its lesson from 2017 when it was scolded for airing the real ending of Fukushi Souta's drama on Hulu. At that time, they even tried to argue their way out by saying that the Hulu episode was not the true ending but the explanation was hardly believable. Anyway, NTV has never been afraid of courting controversy and this probably won't be the last time it will pull a publicity stunt and have it backfire on them.

To me, a TV drama is meant to be shown entirely on TV. If you want to have alternative content like "Tobira no mukou" which explains more about the stories behind the characters, that's fine because I see it more as "enrichment" content which I can choose to view or not and probably doesn't matter so much to the main story. By showing the drama on a free-to-air channel, everyone should be entitled to watch it without having to pay extra unless you are subscribing to a cable network like WOWOW. And mind you, I am actually paying subscription fees to watch Gem which is related to NTV so I am not getting access for free.

As such, when it's a critical part of the story such as the ending that is deliberately shown elsewhere for no apparent reason other than to compel people to sign up for a paid service, I find this rather immoral. If you have no intention of delivering the full deal, I probably wouldn't have bothered watching the drama from the start if you tell me this upfront. After 6 months of following this drama, you are telling people that you have to pay to watch the ending? And so what if I do sign up for Hulu? When not all of the content can be viewed by international viewers due to region restrictions, it is meaningless for me to pay for such an "incomplete" service because I don't get all of what I want. And this is precisely why I still do not want to sign up for Netflix or other similar services even though there are some Japanese content which I want to watch.

Regardless of when NTV makes the announcement about the SP, they will surely suffer a backlash. Sooner or later doesn't make much of a difference. As far as I am concerned, I will be done with this drama when I watch the finale on Gem tonight. No way am I going to sign up for Hulu just to see Akimoto tell me the answers. Oh well, I probably won't be able to see it even if I do sign up because of region restrictions again!
Posted by Chiaki at 6:15 PM

While I don't watch the show but it's immoral for NTV to treat their viewers that way.

Huh, I assumed from the CM at the end of the last episode that the Hulu show was going to be a backstory movie about Sawa Kuroshima.
Didn't realize it was supposed to keep continuing the Anaban story.

The Kuroshima story is not the continuation from the drama's ending but rather explaining how she developed her killing urge and what happened in the past before she moved to this apartment block. What I was talking about in the article was a yet-to-be-announced SP on Hulu which supposedly should feature Akimoto Yasushi as he answers all the unaccounted for questions in the drama.

Thanks for the Info! Hope someone will pick this up and translate!

@ Chiaki-san do you know when the said special episode is supposed to be screened on Hulu? I'm really annoyed that after watching 2 seasons of Anaban, the ending is still open except for Sawa's storyline. I mean who would want to put an old lady dangling on the ledge?

I agree. TV drama is meant to be shown on tv.