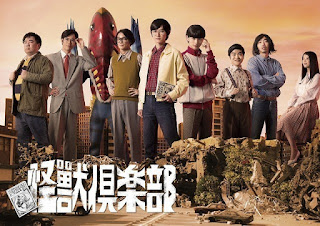 The supporting cast line-up of MBS / TBS Spring 2017 drama "Kaijuu Club Kuusou Tokusatsu Seishunki" has been announced. The drama will begin its run from 4th and 6th June respectively on the two channels at 12.50am and 1.28am respectively and consists of 4 episodes.

The story is set in the mid 1970s and features a group of young men who gather to devote their youth to the research of monsters which appear in special effects films. The lead character Ryouta will be played by Hongo Kanata.

Yokohama Ryuusei will be playing Katsuo, the youngest and only senior high school member in the club who has a lot of knowledge despite his young age and regarded as a threat to Ryouta's presence as the elite of the group. Yano Masato will play Ryouta's rival Shingo while Kato Ryo will be Yuusuke who does the sketches of the monsters. Yamaguchi Shogo will be Nishi, who utilises his knowledge of music in the group while Emoto Tokio will be Jo who is known for his logical thinking. The group's chief editor Captain who is regarded as the top otaku in the group, will be played by Drunk Dragon's Muga Tsukaji.

Komatsu Toshimasa will be playing the master of the cafe where the group's members gather for their meetings while Ano of Yurumerumo will play a cute waitress working there. Imagawa Aoi will play Ryouta's younger brother Satoru who looks at his elder brother's interest with disdain but somehow has the hidden urge to support him in his pursuits. Last but not least, Baba Fumika will play Ryouta's girlfriend Yuriko.