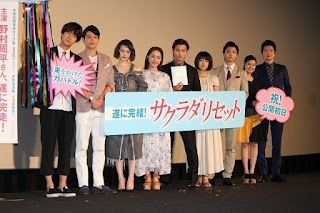 With regard to the likelihood of doing another sequel, Nomura revealed that he was not keen on the idea as he had too many lines due to his character's special power of maintaining memories and had to do a lot of explanations. In total, he had 230 pages of lines in the scripts for both movies. However, if the box office takings for the movies cross the JPY 30 billion mark which is very challenging, Nomura said that they might do another sequel and will show it in Hollywood next time which led the audience to laugh. Despite the challenge this time, Nomura said that he still enjoyed starring in his first two-part movie and doing all the promotional appearances in printed media and on TV.

At the beginning of the filming period, the cast members were quite shy in front of one another so the atmosphere on the set wasn't that cheerful. Nomura remarked that it seemed like junior actors these days tend not take the initiative to speak if their seniors do not take the first step but Kentaro said that he found it hard to talk to Nomura who behaves like a delinquent at times. Upon hearing this, Nomura said that this must be when he was feeling sleepy and told Kentaro not to talk to him when he is in this state.

As part of a surprise event, the cast members prepared letters addressed to Nomura where they expressed thanks to him for his leadership on the set. After hearing these, Nomura stressed that he would not cry on stage and is the type to hide at home to cry. When Kentaro teased Nomura for having tears brimming in his eyes, Nomura tried to hide his embarrassment and said that he just wants to go home quickly to take care of his pet dog.