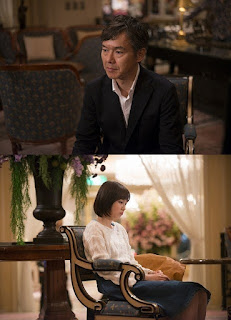 Watabe Atsuro and Iitoyo Marie will be starring in the drama "Papakatsu" jointly produced by video streaming service dTV and FujiTV-on-demand (FOD) which consists of 8 episodes and will be released at midnight on Mondays from 26 June. The drama is a scandalous love story written by Nojima Shinji on the theme of papakatsu which refers to the trend of young women looking for men much older than them to date and get financial support from but with no sexual relationship between them. Nojima commented that many of such women involved in these relationships or seeking such partners are in financial difficulty due to their inability to pay their school fees or scholarships but there has been criticism over how it is a nicely-packaged way of describing compensated dating. Although the story is fictitious, Nojima hopes that the viewers can try putting themselves into the heroine's shoes and consider if they would make the same choices when faced with a similar situation.

The story describes how a 20-year-old university student Anri (Iitoyo) is chased out of her house when her mother has a new boyfriend. While spending every night at different Internet cafes, Anri comes to know about "papakatsu" and subsequently meets a 45-year-old university lecturer Wataru (Watabe). Anri then moves into the apartment which Wataru rents for her before finding out about a secret which he has been hiding from her. Co-stars include Kentaro, Kirishima Reika and Hashimoto Satoshi.

Watabe reflected on the filming and commented that it was a precious experience to be playing a character very unlike himself and he had to spend a lot of time understanding his character's feelings. In addition, he was glad to be able to take on such a project just before he turns 50 and had learnt a lot from his first participation in a Nojima work. On the other hand, Iitoyo said that her character is in a forbidden relationship with a man of the same age as her own father and hopes that people of her age group will be able to appreciate the different way of how such a romance is depicted by Nojima. She also commented that another highlight will be some romantic scenes which are bound to set hearts of the audience fluttering.