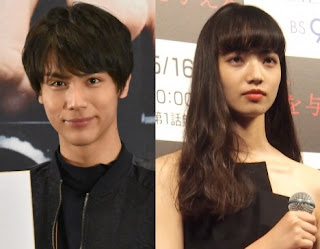 The cast of new movie "Sakamichi no Aporon" i.e. Hey! Say! JUMP's Chinen Yuri, Nakagawa Taishi and Komatsu Nana and some members of the crew sustained injuries due to a boat accident at Nagasaki on 14 May after finishing their filming for the day. Details of the accident were revealed on the following day via the movie's official website.

The statement revealed that there were 11 cast and staff members who boarded a marine taxi departing from Kuroshima around 9.30pm after wrapping up the filming for the day. However, the 12-tonne ship bumped into a breakwater about 100m away before it resumed its journey to Ainoura Harbour. 7 of them including the three actors were sent to a hospital for treatment of which two female staff members sustained serious injuries such as fractured ribs while the rest suffered bruises due to the impact. Filming was then suspended on the 15th but the movie is still expected to be completed by mid June. It was announced that the three actors went through a detailed check-up which found no abnormalities.

Investigations into the accident are ongoing.

In order to set everyone at ease, Nakagawa updated his blog on 16 May and mentioned that he is fine and did not suffer any injury. He apologised for any worry caused by this and confirmed that he will continue with the filming as scheduled. Nakagawa also said that there are many unexpected things in life like this incident but these, along with the happy and sad things in life, are what makes life interesting. He is thankful for everyone's concern and support and hopes to be able to complete this movie successfully with the team.

On the other hand, Komatsu also updated her Instagram account one day later where she confirmed that she was OK and apologised for causing concern.