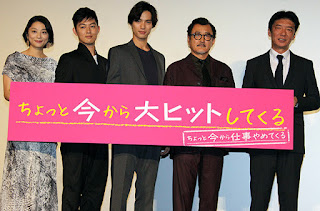 The first-day-screening event of new movie "Chotto ima kara shigoto yametekuru" was held at TOHO Cinemas Roppongi Hills on 27 May which was attended by the director Narushima Izuru and cast members Fukushi Souta, Kudo Asuka, Koike Eiko and Yoshida Kotaro.  The movie features Kudo Asuka in the role of Aoyama Takashi, a young man who has just started his first full-time job and is so stressed by the tough sales targets set by his company and power harassment that he wants to commit suicide by jumping onto a railway track. However, in the nick of time, he is saved by a mysterious man named Yamamoto (Fukushi) who is very cheerful for no reason and keeps speaking Kansai-ben to him. Through their interaction, Aoyama starts to feel the positive energy from Yamamoto rub onto him and things at work improve. Unexpectedly, Aoyama finds out that Yamamoto had actually committed suicide three years ago.

Towards the end of the event, Fukushi was about to make his parting comments when the host said that the director had something to say to Fukushi and Kudo. Narushima revealed that when he first met the two actors, he had a bad feeling that they probably wouldn't do well in his movie thus he pushed them to their limits during the filming. Although he could see that there were times when they were about to buckle under the pressure, he was glad to see that they managed to pull through and grow as actors. Narushima praised them for their hard work and that the viewers can see for themselves in this movie how the two of them can become leading actors in Japanese movies in time to come. He ended his speech by saying thank you to them for the first time.

After being given a hug by Narushima, Fukushi said that he should be the one saying thank you and tried hard to hold back his tears. He then commented that it was tough on the director too to be so demanding of them but he felt that the effort was worth it and he would never forget about how Narushima helped him grow as an actor. On the other hand, Kudo also revealed his worry when he first heard of the offer and said that Narushima offered him support like a father whenever he was unsure of what to do. He pledged to return the favour to Narushima next time when he appears in the latter's work.