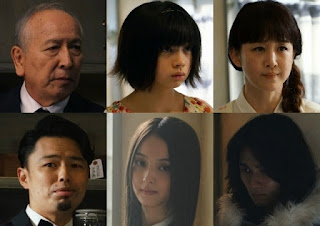 The supporting cast line-up in new movie "Tokyo Ghoul" starring Kubota Masataka has been announced. The six characters are those who appear in the cafe "Anteiku" which seems ordinary on the surface but is an assembly place where the Ghouls gather. The lead character Kaneki Ken (Kubota) is a regular customer at this cafe and becomes an employee there after becoming a half-Ghoul.

The manager of the cafe Yoshimura Kuzen will be played by Murai Kunio while Hamano Kenta will play Koma Enji and Sasaki Nozomi will play Irimi Kaya who are both employees at Anteiku. The character Yomo Renji will be played by Yanagi Shuntaro while Aida Shoko and Sakurada Hiyori will play mother and daughter Fueguchi Ryoko and Hinami.

The movie will be shown in cinemas from 29 July.