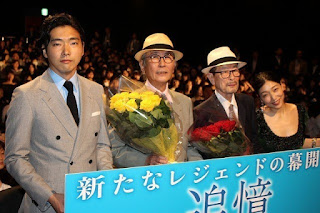 The first-day-screening event of new movie "Tsuioku" was held at TOHO Cinemas Nichigeki on 6 May which was attended by the director Furuhata Yasuo, cameraman Kimura Daisaku and cast members Okada Junichi, Emoto Tasuku and Ando Sakura. The film marks the first collaboration between Furuhata and Kimura in 9 years and is their 16th joint production to date. It is scheduled to be screened during the 20th Shanghai International Film Festival between 17th and 26th June. As a sign of appreciation towards Furuhata and Kimura, Okada and his co-stars presented hats made by premium hat maker Toraya with the words "Tsuioku" embroidered to the two of them.

The movie which is based on an original story, is set in the Hokuriku region where three young boys reunite as adults through a murder case as the police officer investigating the case, the suspect and the victim. Okada plays the police officer in this movie while Oguri Shun plays the suspect in the case. The victim will be played by Emoto Tasuku. As the investigation progresses, the truth behind the case and the unspeakable past of the trio gradually come to light.

In line with the movie's theme between 25 years ago and the present, the talk segment featured the cast showing photos of themselves 25 years ago. Okada provided a photo of when he was around 9 or 10 years ago which led Emoto and Furuhata to remark how cute he was. This made Okada very embarrassed as he explained that the photo was taken by his mother in the room where she taught her students how to play the piano and that was before he entered showbiz and he dreamed of being a school teacher at that time.

On the other hand, Emoto showed a photo of himself when he was around 5 or 6 and he dreamed of becoming a stuntman like Jackie Chan. The photo was taken by his mother after he had just fallen from his bicycle with his face hitting the ground first as she thought that it was an interesting sight to capture. Upon seeing this, Emoto's wife Ando said that he looked pitiful but cute as well because he was wearing his underwear only in the photo. Meanwhile, Ando showed a photo of herself striking a weird pose when she was 5 and explained that she was a quiet and expressionless child most of the time but she did odd things like that once in a while. The couple is expecting their first child to be born in June this year.