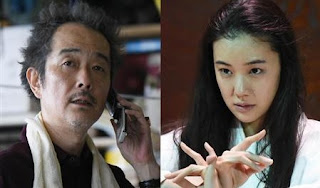 Aoi Yu and Lily Frankie will be joining the cast of TBS Summer 2017 drama "Hello Harinezumi" starring Eita which will begin its run from July in the Fridays 10pm timeslot. The drama is based on the same-titled manga by Hirokane Kenshi, was serialised in "Shuukan Young Magazine between 1980 and 1989. Co-stars include Fukada Kyoko, Morita Go and Yamaguchi Tomoko. Although the manga was set in the Showa era, it will be adapted to be set in the modern Heisei era. Eita plays the role of private detective Nanase Goro who works in the investigation agency Akatsuka Tantei Jimusho in Shimoakatsuka in Itabashi Ward of Tokyo where he takes on any case no matter how troublesome or difficult it may be. Goro is a bit of a lecher and a busybody but he is also passionate and sincere.

Aoi plays the role of a mysterious and beautiful psychic Kawai Setsuko who will appear in the middle of the season to solve cases with Goro using her supernatural powers. Aoi commented that as she has many lines in the script, she is nervous about playing this character and hopes that she won't cause any trouble to her co-stars and the staff. In addition, as she is only joining the drama from the halfway mark, there are many things she still doesn't know about her character so she's relying on instructions from the director when it comes to her acting. On the other hand, Lily plays Minami, the owner of a publishing company who is actually an information vendor well-versed in matters of the underworld and helps Goro with his cases. He is also a journalist with a dark side and helps resolve problems quietly for big companies and the rich and famous.