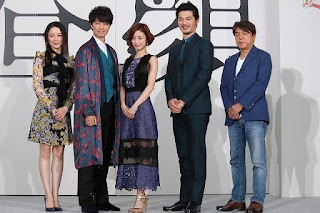 The completion screening event and fan meeting of new movie "Hirugao" was held at TOHO Cinemas Roppongi Hills on 11 May which was attended by the director Nishitani Hiroshi and cast members Ueto Aya, Saito Takumi, Ito Ayumi and Hirayama Hiroyuki. The movie will be shown in cinemas from 10 June.

The film is set at 3 years after the end of the drama where Kinoshita Sawa (Ueto) and Kitano Yuichiro (Saito) meet by chance at a seaside town and begin their forbidden love affair again. Ito plays Kitano's wife Noriko while Hirayama plays the owner of the restaurant where Sawa works at.

When asked if there was any memorable incident during the filming, Saito revealed that they opened a "temporary shop" named Barber Ueto where he was responsible for doing the hairdos of the female staff members while Ueto did the make-up for them. Ueto explained that due to the tight filming schedule, the staff members did not have much time to sleep thus affecting their complexion and their fringes being long enough to cover their eyes. As such, they decided to hold this impromptu doll-up session for them. However, Saito said that all he knew was to apply curls on both the men and women so everyone ended up looking like THE ALFEE's Takamizawa Toshihiko.

Everyone also took turns to relate how Saito was very nice to everyone. For example, Ueto who was with Saito during their trip to Italy for the international premiere of the movie, asked him to buy her a pair of earrings when they were filming a TV programme. Saito thought that it was not nice to reject her request since they were filming and he assumed that the programme's budget would take care of the cost of the earrings but found out that it was the contrary so he had to pay out of his own pocket. Nonetheless, he was pleased that Ueto liked the earrings very much so he didn't mind having to pay for it.

Ueto revealed that she had already given her all during the drama and didn't expect that there would be a sequel even though she had been approached several times to do it. However, she wasn't in the right mode to play Sawa again and the timing wasn't suitable for her so it took about 3 years before the sequel finally materialised. On the first day of filming where they had to shoot a scene of Sawa attending Kitano's presentation, the moment she heard his voice made her slide into the role seamlessly. As such, she expressed thanks to the production staff who never gave up despite these factors and persevered with making this movie.

During the fan meeting, 500 people were selected to take part in this on the condition that they posted the photos they took onto social media platforms. As such, the fans could take an unlimited amount of photos of the cast who appeared with beaming smiles. In the Q & A session from fans, the cast were asked if they were doing anything which they felt that they had to stop doing but couldn't resist doing. Ueto said that she is so obsessed with shopping on the Internet and would spend about 2 hours in bed doing that after tucking her child to bed. She also revealed that Saito bought a cute elephant ring online which he admitted sheepishly that it only cost him 523 yen.

how cute is Saito Takumi!