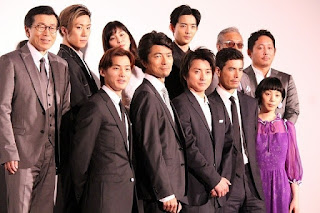 The movie which is based on the 2012 South Korean film, begins in the year 1995 where there were 5 peculiar murder cases. The murderer would always get someone close to the victim to witness how he would strangle the victim from behind with a rope but he would let the witnesses go and speak to the media on how the murders happened. Ito plays the role of Makimura, the police detective who was in charge of investigating the serial murders but failed to catch the cunning murderer and his respected superior ended up being killed as well. 22 years later in 2017 when the case is nearing its statute of limitations, a man named Sonezaki (Fujiwara) claims to be the culprit for the 1995 murders and even publishes a book titled "Watashi ga satsujinhan desu" to talk about the cases. Despite the disgust towards Sonezaki's actions, the intensive attention showered on him via the media and SNS makes him become the talk of town.

Fujiwara reflected on his acting as the arrogant murderer where he actually reacted accordingly to the actions and feelings of his co-stars rather than lead them on with his madness. On the other hand, Ito commented that this was the toughest filming he went through to date in his career where he had to keep running around for three days and nights from the first day so he was always thinking of an excuse to quit regardless of whether it would be very troublesome to do so. Although this movie marks the first collaboration between the actors, they actually bump into each other a lot in private such as when they go to eat ramen or yakiniku at restaurants.

Nakamura who last worked with Ito in the "Umizaru" series more than 10 years ago, said that he was "taken off the ship" (his character who worked on the same navy ship as Ito's was shot dead in the story) against his own will but Nakamura still had a feeling that the "ship" would still become a big hit with Ito being at the helm. However, he was regretful about not being to stay on the "ship" till the end so he hopes to achieve success with Ito this time in this movie.

During the event, Fujiwara, Ito and Nakamura were having a lot of fun talking about what kind of "criminal" they are in line with the title of the movie. However, it went on longer than expected which led Nomura to butt in and said that they were too longwinded. This led the trio to get Nomura to wrap up the segment and they gave the latter the title of the criminal who did not listen to their entire conversation.

When it came to the question of asking the cast to reveal a secret for the first time, Ito revealed that when his son was born two years ago, Miura Tomokazu gave him a very expensive whiskey as a gift and included a letter which asked Ito to drink it with his son when he turns 20. However, Ito did not actually read that letter and drank some of it as soon as he returned home. When he told Miura about how delicious he thought the whiskey was, Miura commented that he must have not read the letter which led Ito to realise that he could have thrown it away. As he took about 4.5 minutes just to relate this story, Fujiwara teased Ito for being too long-winded and said that Ito could have just said one sentence that he did not read the letter. When it was Fujiwara's turn, he revealed how he started took in a stray cat from his neighbourhood recently and even brought it for vaccination before taking it home to become his pet. Although the cat used to belong to someone else, the moment when his wife saw that the house had a fierce dog there, she suggested that they bring the cat home as their pet instead of returning it to the original owner. In retaliation, Ito "scolded" Fujiwara for being even more long-winded than him as the latter took 1.5 minutes just to say such a simple story.