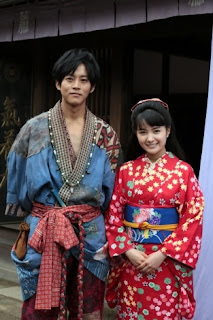 The filming for new NHK morning drama "Warotenka" starring Aoi Wakana began on 19 May followed by a press conference attended by Aoi and Matsuzaka Toori at the Shochiku Studio in Kyoto on 25 May. The drama is set during the late Meiji era to post-World War II period at Osaka featuring the lead character Fujioka Ten who is modelled on Yoshimoto Sei, the founder of Yoshimoto Kogyo and a female show promoter. Fujioka was born into a family managing a drug wholesale business in Kyoto and meets Kitamura Fujiyoshi (Matsuzaka)who is the son of a family in the rice dealing business at Osaka. When they fall in love, Fujioka goes against her parents' wishes to marry Kitamura who is a big lover of comedy. Subsequently, after her husband's family goes bust, she unwittingly becomes the owner of a vaudeville theater with her husband. This then leads to her becoming the first person in Japan to make comedy into a business and transforming Osaka into a capital of comedy.

Matsuzaka who is appearing in his second morning drama to date, appeared in a strange-looking costume which was said to be the norm for comedians in that era. The last time he filmed "Ume-chan Sensei" was in Tokyo so filming in Osaka is an entirely different and refreshing experience for him. Nonetheless, as he had worked with some of the staff members before in "Ume-chan Sensei" and "Gunshi Kanbee", it also felt like a reunion for him when he came to the set for the filming.

Aoi commented that she usually has short hair but having to put on a long-haired wig and dress in such gorgeous and luxurious clothes made her very excited. Although they haven't completed many scenes yet, being all dressed up like this helped her ease into the momentum of the filming. She also revealed that she came down with flu on the first day of the filming probably due to her nervousness and promised to take care of herself better so that she can stay healthy during the filming period.

Filming is expected to continue in Shiga and Kyoto until 27 May before moving to NHK Osaka from 29 May. The drama will begin its run from 2 October at 8am from Mondays to Saturdays.