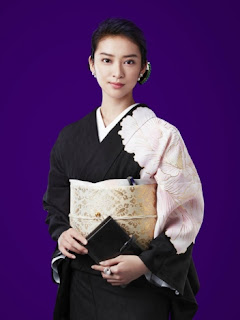 Takei Emi will be starring in the TV Asahi Summer 2017 drama "Kurokawa no Techou" (The black leather notebook) based on Matsumoto Seicho's famous same-titled novel which will begin its run from July in the Thursdays 9pm timeslot. The novel which was serialised between 1978 and 1980 before it was published as a single book in 1980, describes how a contract bank employee Haraguchi Motoko is stuck with a huge debt of her mother after her father passed away. In order to repay the debts, she works part-time at a nightclub in Ginza. Just when she has finished paying her debts, news of her impending retrenchment reach her. Motoko then makes up her mind to leave the bank and embezzles JPY 180m from her employer which is used to open a high-class club Carnet. With the list of dummy bank accounts of the rich and famous which she acquired from her previous job and recorded in her black notebook, Motoko rises up the ranks in the world of darkness filled with love and desire. As Takei is turning 24 years old this year, the Motoko in this new drama will be set as the youngest mamasan to date in Ginza's history at 25 years old. To date, there have been a number of drama adaptations of this novel where the most recent versions were in 2004 starring Yonekura Ryoko which had an average rating of 15.7% and the SP in 2005. At that time, Yonekura was 29 years old which was the same age as Motoko in the novel.

Takei who is starring in her first Matsumoto work, said that she felt very pressurised when she first got the news about being offered the role especially since the role of Motoko was regarded as the turning point in Yonekura's acting career. As Yonekura is her senior from the same agency, Takei had been invited to meals with her many times in the past and received a lot of acting advice. She pledged to do her best for this role and hope to do well enough to earn a passing mark from Yonekura and scale new heights in her career.

Filming will begin in mid June and co-stars will be announced on a later date.

How is Takei Emi still getting jobs? Ugh.

Despite all this talk about her not being able to bring in ratings and box office takings, she still gets leading or heroine roles with no end in sight. Maybe it's the power of her agency at work...it sure sounds better to have a "handover" from senior to junior of the same company.

She need give justice to the role! Because Yonekura Ryoko give a remarkable one!