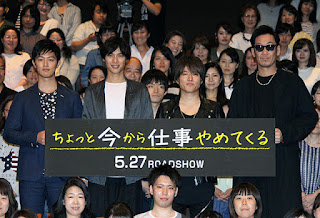 The premiere screening event of new movie "Chotto ima kara shigoto yametekuru" was held on 21 May which was attended by cast members Fukushi Souta and Kudo Asuka as well as Kobukuro who sings the theme song "Kokoro" for the movie. During the event, Kobukuro performed the song "live" for the first time which also happened to be their first at a movie event in 9 years. Fukushi expressed his joy at being able to listen to Kobukuro's performance live as he has been a fan since he was a student and thanked them for the song which was very touching. Kudo revealed that his family members are also fans of the duo and his father keeps playing their songs the whole day.

Kobukuro were generous with their praise for the movie of which Kobuchi Kentaro who had worked as a company employee before, said that he could identify with the theme of the movie which was very realistic. As for Kuroda who comes from Osaka, he commented that Fukushi's first attempt at speaking Kansai-ben was pretty good. With regard to how they came up to the song, Kobuchi revealed that he was taking notes while watching the movie and completed the song about 5 minutes later after he finished it.

Fukushi mentioned that each person may develop different views about the movie after watching it but he hopes that they will be getting a positive vibe by the end of it in order to take their next step in life. Kudo also echoed the view that this is not just about working life but also how people are connected to one another and family love.