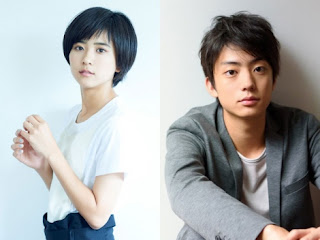 Kuroshima Yuina and Kentaro will be starring in the new NHK real-life adaptation drama "Ashi Girl" which will begin its run from 23 September in the Saturdays 6.05pm timeslot. The drama consists of 12 episodes and is based on the same-titled manga by Morimoto Kozueko.

Kuroshima plays the 16-year-old lead character Hayakawa Yui whose only strong point is her ability to run fast. She accidentally goes back into time to the Warring States era where she makes use of her ability on the battlefield to protect her beloved young prince. Through finding a goal to work towards to, Yui finds a new world waiting for her as she uses her power to change the person she loves and move the people she meets.