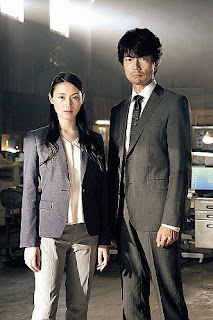 Nakamura Tooru will be starring in the new TV Tokyo drama SP "Kenshou Sousa" (Verification Investigation) which will be shown at 9pm on 5 July. The drama is based on the same-titled novel by Douba Shunichi which had sold more than 420,000 copies to date.

Nakamura plays the lead character Kamiya Goro who is transferred to Izu-Oshima Police Station from the 1st Investigation Section of Metropolitan Police Department for a misdeed he committed. He is summoned to join a special team of police officers with marred records like himself at Kanagawa Prefectural Police to investigate a false charge case which could lead to the exposure of some dark secrets within the police force. Kuriyama Chiaki plays Yasui Rin, a specialist in sex crimes from Hokkaido Prefectural Police who has an emotional wound of her own.

Nakamura admitted that when he first read the script, he was struck by how dark it was especially since the characters have all made mistakes before or suffered emotional trauma in the past. In his case, Kamiya had committed such a serious mistake that there was no turning back for him. However, at the suggestion of the director, it was decided that he would not focus on the dark side of Kamiya but rather show his charms in a different way to make the drama more interesting. Interestingly, in Nakamura's 32-year career, this is the 13th time he has played a police officer.

On the other hand, Kuriyama said that although she has played police officers before, this is the first time she is playing such a police officer who is so serious about her job and demanding of others. Although the reason for her behaviour will be made known in the later half of the story, Kuriyama said that viewers may find her unreasonable at first as she had deliberately projected this image through her acting.