Mackenyu announces his name change and transfer to a new agency 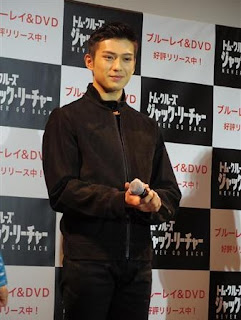 Mackenyu announced via his official Twitter on 22 May that he will be changing his stage name and transfer to a new agency. His new name will be Arata Mackenyu and he will be joining the agency Top Coat which has actors such as Kimura Yoshino, Sasaki Nozomi, An, Nakamura Tomoya, Matsuzaka Toori and Suda Masaki under its management. Soon after he posted the announcement at 12.03pm, he changed his name on his Twitter page and his profile on Top Coat was ready to be accessed.

Arata was born in Los Angeles, US, on 16 November 1996 and his father is actor Chiba Sonny. He learnt karate and apparatus gymnastics since he was a child and made his debut in the US as an actor before returning to Japan in 2014. He won the newcomer award in the 40th Nippon Academy Award for his performance in the two-part movie "Chihayafuru". Coincidentally, his new surname coincides with his role's name in the same movie (Wataya Arata) which led to fans speculating on the origin of the name.