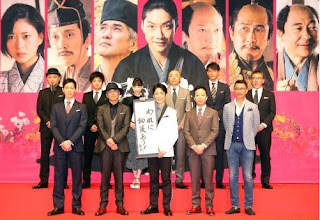 The film is based on the same-titled novel by Onitsuka Tadashi which was inspired by the legendary ikebana work "Osunamono" created by ikebana artist Ikenobo Senko in 1594 that was placed in the residence of Maeda Toshiie for the purpose of displaying to Toyotomi Hideyoshi. The story talks about the little-known story of the friendship between Senko and Sen no Rikyu, a master of the tea ceremony and how Senko who was regarded as the leader of a group of Buddhist monks in Kyoto named Ikebono then, chose to take revenge against Hideyoshi with flowers rather than a sword. During the 16th century where Kyoto was plunged into the chaos of war, there was a group of Buddhist monks named Ikenobo who believed that the art of flower arrangement would allow them to pray for peace and that people would have hope to continue living by looking at these creations. Just before Oda Nobunaga was about to unite the country, Senko, one of the monks in Ikenobo, was asked to create the Osunamono for Nobunaga and headed to Gifu Castle. While there, Senko meets a mysterious man. He also ended up offending Nobunaga with his creation but was saved by Nobunaga's young subordinate Kinoshita Tokichiro (later known as Toyotomi Hideyoshi). 12 years later when Nobunaga was no longer living and Hideyoshi had taken over, Senko reunited with the mysterious man he met who turns out to be Sen no Rikyu and had become Hideyoshi's tea master. The two of them became close friends who understood each other well. However, with his newfound power, Hideyoshi had beome a changed person. In his bid to practice his way of tea ceremony, Rikyu was forced to commit suicide by Hideyoshi. In addition, innocent people got killed as a result of Hideyoshi's madness. To take revenge for his buddy, Senko uses his skills in flower arrangement rather than resort to violence with a sword. Nomura will play the role of Ikenobo while Ichikawa will play his rival Hideyoshi. Sato Koichi will play Ikenobo's friend Sen no Rikyu while Nakai Kiichi plays Oda Nobunaga and Sasaki Kuranosuke plays Maeda Toshiie.

Nomura commented that he spent a very meaningful time acting in this movie as if he had spent half of his lifetime on it and it offered him a chance to experience the joy of acting to the fullest. As for Ichikawa, he felt that he had grown as a kabuki actor through this collaboration with many senior actors and spent a fruitful time working on this movie. Sato also praised this film for being a rare gem which hardly comes by and hopes that the timeless theme will be conveyed to as many people as possible.

In the movie, there was a scene where Hideyoshi stepped on the head of Rikyu which made Ichikawa very uncomfortable when he had to do it and kept apologising to Sato deep down in his heart. In response, Sato said that Ichikawa hardly applied any force on him when he stepped on his head so he had to tell him to step harder. Upon hearing this, Nakai teased Sato for being masochistic so the latter didn't mind the pain.