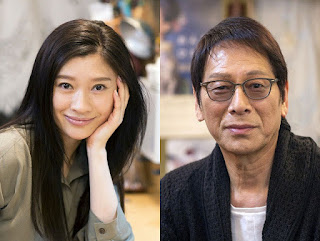 The guest and supporting cast line-up of TV Tokyo Summer 2017 drama "Izakaya Fuji" has been announced. The drama starring Nagayama Kento and Oomori Nao is set in an izakaya named Izakaya Fuji that exists in real-life at Naka Meguro and describes the life story of the owner of the place who was nicknamed Oyaji and passed away in 2014. Nagayama plays a struggling actor named Nishio Eiichi who keeps getting roles to play dead people. One day, in order to boost his spirits, he tries to find an izakaya which he saw on the Instagram account of a girl he likes and ends up at Izakaya Fuji which is filled with signature boards of the famous and has a strong Showa feel. What's more he finds actor Oomori Nao there (Oomori playing himself)! Through his interaction with the people there, Nishio gradually realises what is important to him in life. The dishes served at the bar will also be featured in the drama.

Shinohara Ryoko and Oosugi Ren will be the guests in the first two episodes of the drama. Shinohara commented that she used to frequent Izakaya Fuji 25 years ago and had fond memories of going to the owner couple for advice whenever she was troubled. In addition, it has been a while since we worked with Oomori and Nagayama so she feels reassured to reunite with them but would have loved to participate more in the filming. As such, being able to act in this drama allows her to reminisce about her 20s. As for Oosugi who appeared recently in the Winter 2017 drama "Byplayers" as himself, he remarked that the TV station seemed to have a tendency these days to ask actors to play themselves to the extent that he feels like having a name for his character now. As he will be required to show the lecherous side of himself in this drama, he hopes that viewers will enjoy watching his guest appearance.

As for the supporting cast, Tateishi Ryoko will play Takahashi Mitsuko, the lady boss of the izakaya while regular customers include Hirata Atsuko who plays Reiko, the manager of boutique Maharaja, and Suwa Taro who plays Sho-chan, the president of a construction company. Nishio's mother Tamami will be played by Yo Kimiko while Nakamura Genki will play Akiyama Kenji, Nishio's supervisor at his part-time workplace and Murakami Jun will play Kudo Shunsuke, Nishio's senior at work.