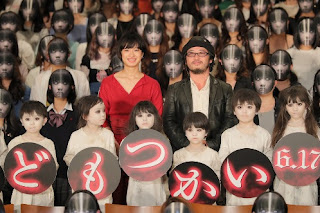 The special event of new movie "Kodomotsukai" was held at Iino Hall on 17 May which was attended by the director Shimizu Takashi and cast members Takizawa Hideaki, Arioka Daiki and Kadowaki Mugi. The movie which is based on an original script, features Takizawa as a mysterious man who manipulates the spirits of children by entering into their hearts and taking control of their spirits. Three days after the children disappear, they will cause the mysterious deaths of the adults who meet them. Arioka plays a news reporter trying to investigate the truth while Kadowaki Mugi plays his girlfriend and is being manipulated by Takizawa's character.

In line with the theme of the movie, the hall was designed to look like a haunted house and the screen was suddenly turned off before showing a part of the movie. Takizawa then appeared with bright red lights showered on him and commented that he was pleased that the audience seemed to like their arrangements. This movie is somewhat like a challenge to him as this marks his first leading role in a movie and his first horror movie so he has been eagerly anticipating the release of the film.

When it was Arioka's turn to speak, he stumbled over his words which led his senior Takizawa to tease him about it. Arioka then commented that he had a deep impression of the shock he encountered after watching "Juon", another movie directed by Shimizu, so he was excited about being able to work with the latter. However, Takizawa poked fun at Arioka for lying again which led everyone to laugh at this remark.

During the second half of the event, Takizawa continued to play around with Arioka by "picking" on his comments. When Arioka was asked about his impression of Takizawa, Arioka said that he expected to get closer to his senior during the filming but he was too much in awe of Takizawa who had the scary aura of the kodomotsukai and couldn't get close to him at all. However, Takizawa said laughingly that Arioka was shy and just using him as an excuse because Arioka did not take the initiative to approach him at all. Kadowaki also echoed the same view and wondered how they could play lovers when they were so unfamiliar with each other.

"Kodomotsukai" will be shown in cinemas from 17 June.