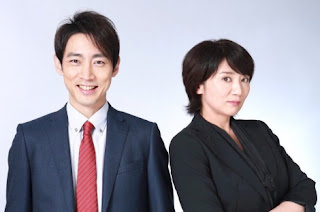 Koizumi Kotaro and Matsushita Yuki will be reprising their roles in the sequel to their TV Tokyo Winter 2016 drama "Keishicho Zerogakari ~ Seikatsu Anzenka Nandemo Soudanshitsu~" (Metropolitan Police Department Section Zero ~ Community Safety Department's Office for consultation regarding anything) which will be shown from July this year. The new installment titled "Keishicho Zerogakari ~ Seikatsu Anzenka Nandemo Soudanshitsu~SECOND SEASON" features Koizumi as Kobayakawa Fumihiko, a naive superintendent who is oblivious to his surroundings and Matsushita as Terada Torami, a foul-mouthed veteran police detective. The two of them work with other detectives seen as worthless by the organisation (thus earning the name Zerogakari because anything multipled by zero is still zero) to solve various difficult cases. Regulars from the first season who will be returning in the sequel include Adachi Yumi who plays Honjo Yasuko, an admin officer who insists on working only between 9am and 5pm, emphasizes productivity and has a venomous tongue, TKO's Kinoshita Takayuki who plays Sakuraba Yusaku, a hardworking detective who cannot climb up the hierarchy despite his efforts and Oosugi Ren who plays the section chief Kameyama Yoshio tasked to spy on Kobayakawa secretly. Other co-stars include Rokkaku Shinji, Kishi Asuka, Ishimaru Kenjiro and Kato Cha.

The drama's producer Matsumoto Taku revealed that when they finished filming the first series, the cast were eager to get together again for a sequel so they are all very happy that this has finally materialised. Koizumi also commented that he's happy to play Kobayakawa again and meet up with the members of Zerogakari in the sequel. Matsushita revealed that with new members added to the lineup, the Zerogakari will be back with a boost to its strength and hopes that the viewers will enjoy watching it.