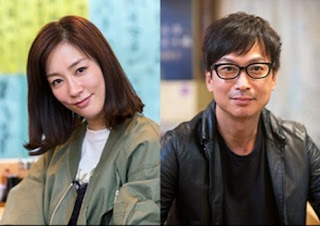 Mizukawa Asami and Shiina Kippei will be playing themselves as guest stars in the upcoming TV Tokyo Summer 2017 drama "Izakaya Fuji" which begins its run from July in the Saturdays 12.20am timeslot. The drama starring Nagayama Kento and Oomori Nao is set in an izakaya named Izakaya Fuji that exists in real-life at Naka Meguro and describes the life story of the owner of the place who was nicknamed Oyaji and passed away in 2014. Nagayama plays a struggling actor named Nishio Eiichi who keeps getting roles to play dead people. One day, in order to boost his spirits, he tries to find an izakaya which he saw on the Instagram account of a girl he likes and ends up at Izakaya Fuji which is filled with signature boards of the famous and has a strong Showa feel. What's more he finds actor Oomori Nao there (Oomori playing himself)! Through his interaction with the people there, Nishio gradually realises what is important to him in life. The dishes served at the bar will also be featured in the drama.

Mizukawa will be appearing in the 3rd episode when she seeks refuge at the izakaya while being chased relentlessly by a tabloid reporter about a relationship rumour. She remarked that the atmosphere on the set and how welcoming everyone had been towards her made her feel at ease. Although this is the second time she is playing herself, there are parts which aren't related to her in real life. As such, there was some difficulty in saying those lines but she tried to convey them in the most natural way possible.

On the other hand, Shiina who will be appearing in the 5th episode, said that he first visited the izakaya 30 years ago when he just started out as an actor. As such, the lines given to him had a strong sense of reality and made him think back about his past which was incorporated into the script. In addition, being able to work with colleagues like Oomori and Yo who he knows well made him enjoy the experience very much. Coincidentally, this is also Shiina's second attempt at playing himself after he first did that in TV Tokyo Winter 2017 drama "Byplayers".