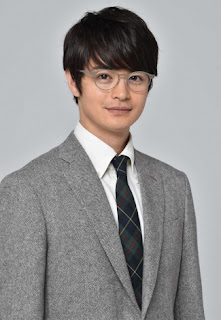 Seto Koji will be appearing in the NTV Autumn 2017 drama "Saki ni umaretadake no boku" starring Sakurai Sho which will begin its run from October in the Saturdays 10pm timeslot. The drama is based on an original script by Fukuda Yasushi and features Sakurai as Narumi Ryosuke, a 35-year-old former elite businessman who is transferred by his company Kashimatsu Bussan to become the principal of a private senior high school named Kyoumeikan Koukou and turn its fortune around. The struggling school's results are on the lower end of the spectrum, its sports teams aren't doing well in competitions and its enrollment numbers are about to slide below the minimum level required to keep it afloat. Narumi knows nothing about education nor managing a school so he has to rely on his knowledge as a businessman to deal with the situation and introduce reforms in Kyoumeikan with the aim of boosting enrollment numbers, improve the quality of the teachers and students and make the school profitable again. He is met with strong resistance from the students who have never savoured success and the teachers who have no motivation to improve but tries to show them the reality and harsh truths of society through his first-hand experience. The heroine Mashiba Chihiro who is at loggerheads at first with Narumi but later gets inspired by him will be played by Aoi Yu while Narumi's girlfriend cum former colleague Matsubara Satoko will be played by Tabe Mikako.

Seto will play be playing Shimazu Tomokazu who is an English teacher at Kyoumeikan and an advocate and expert on the new teaching style i.e. active learning. Although Shimazu had studied in the UK and can speak like a native, he is very shy and keeps to himself so he is hardly noticeable among the students and teachers. Upon hearing about Shimazu's ingenious teaching style, Narumi is very excited about it and wants this to become one of the first things which the school should implement as part of its reforms. Shimazu is also secretly in love with his colleague Mashiba.

As part of preparations for the filming, Seto went to observe active learning lessons where he noticed that the students were actively taking part. As such, he could not help but think that if this learning method was in use when he was a student, he could have learnt more in a more enjoyable setting. As for his character in this drama, Seto commented that as Narumi and Shimazu will be aiming to change the school in the story, he hopes that this will provide a catalyst of change for the viewers and bring about a change in himself as well. Although there is always fear and worry about changing something or taking on a challenge, things may actually turn out to work out well.