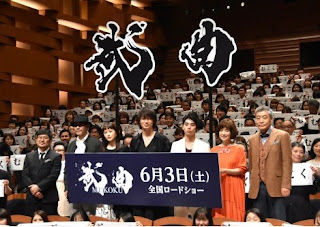 The completion screening event of new movie "Mukoku" was held at Yomiuri Otemachi Hall on 15 May which was attended by the director Kumakiri Kazuyoshi and cast members Ayano Go, Murakami Nijiro, Maeda Atsuko, Fubuki Jun, Kobayashi Kaoru and Emoto Akira. The movie which is the first collaboration between Kumakiri and Ayano since the movie "Natsu no Owari" three years ago, will be screened in cinemas from 3 June.

The movie which is based on the same-titled novel by Akutagawa Award-winning writer Fujisawa Shu, features Ayano as Yatabe Kengo who holds the Godan rank in kendo but chooses to live a life filled with alcohol and works as a security guard at a train station's building due to an incident. One day, he happens to meet a senior high school student Hada Toru played by Murakami Nijiro who loves rap and is obsessed with writing rap lyrics. Kengo sees Toru's talent as a gifted kendo swordsman which inspires him to undergo training with the latter under a monk who holds the Hachidan where they later face off in the battle of destiny.

During the talk segment, the cast were asked on who they consider in their hearts to be their eternal rivals. Ayano who was the first to speak, jokingly cited his character Ken-san in the ongoing NTV Spring 2017 drama "Frankenstein no Koi" as the eternal rival of Kengo in this movie. When it was Murakami's turn, he mentioned his parents i.e. actor Murakami Jun and singer UA as his eternal rivals since they are both working in the same industry. Upon hearing this, Ayano said that he regretted fooling around and giving such an embarrassing answer. Meanwhile, Maeda said that when she was in AKB48, the people around her created many "rivals" for her but she actually felt that these people are important to her and is thankful for their presence. Ayano then butted in to say that he suddenly realised that he was standing in the centre today (the most popular member in AKB48 gets to stand in the centre) and apologised for "robbing" her of the centre position which she used to hog.

In order to prepare for the filming, Ayano went through two months of kendo and muscle training and even abstained from alcohol. As such, he was able to use his frustration built up over the period in a positive way during the filming. Maeda chipped in to praise her co-star for looking very cool during the kendo match scene. Murakami then revealed that he sprained his finger during their fight sequence and he was surprised by how quickly Ayano reacted by shouting for ice packs to be given to him once the scene was completed.