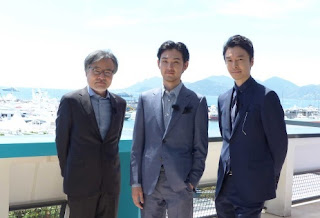 Matsuda Ryuhei and Hasegawa Hiroki attended the red carpet event and official screening of their new movie "Sanposuru Shinryakusha" held at the Cannes Film Festival on 21 May along with the film's director Kurosawa Kiyoshi. The movie is scheduled to be shown in Japan from 9 September.

Prior to the event, the trio were interviewed by the media where Hasegawa commented that it was a miracle that he could attend this since he could only spend 24 hours at Cannes (arrived at 10am on 21 May and scheduled to leave at 10am the following day) before rushing back to Japan for the filming of his ongoing TBS Spring 2017 drama "Chiisana Kyojin". He revealed that his co-star in the drama Kagawa Teruyuki also encouraged him to attend the screening despite the tight schedule especially since Kagawa himself had gone to Cannes before with Kurosawa for the movie "Tokyo Sonata". Although Kagawa suggested to Hasegawa to check out the review of the movie in the papers the following morning, Hasegawa said wryly that he wouldn't be able to read it in time since he had to take the flight home in the early morning after the screening and continue with the drama's filming in the afternoon of 23 May. As for his memories of Cannes, Hasegawa said that he passed by the city 18 years ago while on a solo private trip to Nice in March and caught a cold at that time. On the other hand, this was Matsuda's second visit to the festival following his first trip for his debut movie "Gohatto" in 1999. Unfortunately, Nagasawa Masami who plays his wife in the movie, was unable to join them on this trip due to scheduling conflicts.

During the screening attended by 1,000 people, the actors greeted the audience in French. As the movie also touched on the theme of love between a married couple, Matsuda who was rumoured to be having problems with his wife Ota Rina earlier this year, was asked if he had thoughts about this topic after acting in the movie. Although he did not give any details, Matsuda said that the story did provide some food for thought. The actors were also pleased to see the audience clapping and shouting "Bravo!" at the end of the screening and vowed to return to the film festival again.