Uehara Takako & Abe Tsuyoshi exposed for having extramarital affair; cited to be possible reason for her husband's suicide 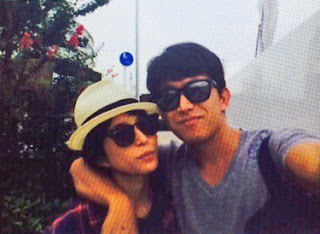 Uehara Takako and Abe Tsuyoshi are said to have had an affair three years ago despite both being married then and that this was a possible reason leading to her late husband TENN's suicide three years ago as reported in the 10th August issue of magazine "Josei Seven". Below is a summary of what led to the revelation of this scandal from the various sources:

- TENN was found to have committed suicide on 25 September 2014 by Uehara who had gone to their apartment's carpark to search for her husband who didn't return home the previous night. The couple had just celebrated their second wedding anniversary on 23 August. At that time, it was reported that TENN had left three suicide notes to Uehara, his fellow ET-KING members and his fans but the reason for his suicide was not made clear then despite rumours swirling around about his less-than-successful career as compared to his wife and how she had to spend a lot of time in Tokyo for work while he was based in Osaka which led to them drifting apart.

- Things took a drastic change when TENN's younger brother reportedly went to the media recently with evidence of Uehara's infidelity with Abe in the form of LINE messages and intimate photos of the two such as hugging or kissing. These were said to be retrieved from TENN's smartphone which was in his family's custody after his death. As such, the family already knew three years ago that Uehara was supposedly having an affair with Abe before TENN's death. It was reported in the recent article that TENN's mother i.e. Uehara's mother-in-law had stopped her family then from taking any action on the basis of this discovery.

- Ultimately, what led to a change in the situation eventually was related to Uehara's action recently before she was exposed by FRIDAY to have a new boyfriend. Soon after TENN's death, his mother had asked Uehara to remove herself from their family register since she is still young and there is a likelihood that she will get remarried in future. As such, she didn't want Uehara to be burdened by carrying their family name and feeling obliged to continue being a widow. Uehara reportedly rejected this suggestion and asked for permission to continue bearing the Moriwaki (TENN's surname) name even though TENN's mother had raised this suggestion a number of times since then.

- However, when the FRIDAY report about Uehara's new relationship was about to come out, she was said to have gone to her former in-laws and asked to remove herself from their family register. It was later then that they realised that this had to do with her having a new boyfriend named Kou Kazuya and her intention to get married to him even though she had all along been the one who wanted to retain the family surname. This angered the family members who had been keeping a lid on her infidelity and they confronted Uehara with evidence of her affair and demanded compensation of tens of millions of yen. Having no choice but to admit to her affair, Uehara made a counter offer to pay them compensation on a monthly basis as she couldn't afford to pay a lump sum. However, the family rejected her attempt to settle this with money and didn't want TENN's reputation to be affected any longer due to the untrue rumours about their income gap which supposedly caused his suicide. As such, this was reportedly why TENN's brother approached the magazine with the information to let everyone know the truth.

- Along with the photos and LINE messages exchanged between Uehara and Abe, the most crucial piece of evidence will have to be TENN's suicide note which revealed how apologetic he was about his inability to have children and how he actually knew about her affair with Abe:
"Takako, thank you and goodbye. Sorry for having a body which cannot have children. I am really sorry.
For the amount of happiness I had, I have the same amount of fear about the future where I don't think I will have anything left. Please forgive me.
Please be happy on my behalf too. I'm sure you will be able to overcome this with Abe Tsuyoshi.
You shouldn't betray someone next time. Drink lesser. Don't lie.
I guess you must hate me, right? However, please forgive me one day. There are so many things which have become too heavy for me to bear...sorry.
This is the best decision I've made in view of the future. Please forgive my wilfulness.
There will come a day when you will forget about me. You will be fine although it will be tough for you at the moment.
Work hard and become happy with Dongdong.
Don't open the car door and call for the police."

- The LINE messages published in the magazine also showed how Uehara and Abe supposedly expressed their passionate love for each other, addressed each other by nicknames such as Dongdong (Abe's Chinese nickname) and Taka-chan and how she couldn't lie to her husband anymore when her heart was with Abe. Uehara also spoke of how she wished that she could dump everything and be with Abe but there were difficulties which she couldn't ignore as an adult. The two of them also talked about having children of their own but they had to find a suitable timing before doing so.

- Uehara and Abe reportedly met while working on a stage play which was performed between July and September 2014 i.e. months before TENN's suicide. Even with the rehearsal period counted, it was said that their affair was merely a few months' old. However, their relationship seemed to have progressed tremendously in that short amount of time as seen by how she was willing to leave her husband and how they talked about having their own children.

- Since news of their reported affair were reported, Uehara and Abe have both stopped updating their social media accounts and didn't comment publicly about this matter. It was also pointed out that Abe had stopped updating his social media accounts for as long as 8 months after TENN's death three years ago. Meanwhile, Uehara is currently involved in rehearsals for an upcoming stage play and was said to have apologised to the staff and her co-stars for having caused a disturbance due to the news.

Very good summary. I just want to point out that her offer to pay a monthly sum to her family was a counter offer to their demand of tens of millions of yen. She claimed she couldn't pay that much. (Sponichi article)

Hi Zoe, thank you for pointing that out. I have added this to the original post.

Does takako uehara ever had a childhood memories of her life. Takako uehara doesn't have a good memory .secret memories a woman ever want a relationship with the family and kids, growth up to be prefect couple always care for life span look like parent, grand parents ,seen their grandchildren, and even long long time ago whenever they are were be together

Takako uehara u message on line what giving up everything in your life career and miss you, love ,find you where ever place would be there waiting 😱 takako uehara why coping those word to be threatened

If your father koharu uehara still around alive and u wouldn't have to go answer any questions about your own self childhood. Takako uehara where ever you your mother, older brother and older sister will be there for you ,broken heart and love,life,soul&mind,break up still to morning