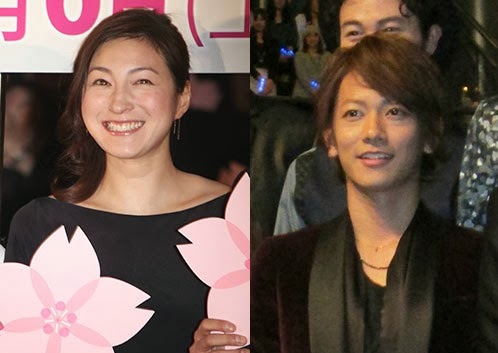 Hirosue Ryoko and Sato Takeru are said to be having an affair according to the 27th February issue of "Josei Seven". The magazine reported that Hirosue was caught leaving her apartment at 8.30pm on 21st February while dressed in fishnet stockings and 12cm-high stiletto heels and was carrying a big paper bag in her right hand which the reporters speculated could be a late Valentine's Day present. After a 15-minute taxi ride, Hirosue arrived at Sato's apartment and used the intercom to inform him of her arrival. Soon after, the lobby was unlocked and she headed into the apartment building. 9 hours later at 5.20am, a taxi pulled up at the entrance of Sato's apartment building and 15 minutes later, Sato's agency car also arrived at the same venue. Sato was seen boarding his agency's car in a big hurry and believed to be heading to his work venue. Soon after, Hirosue also left the apartment block from the back door and boarded the taxi which had been waiting for more than 20 minutes. The article also mentioned how the two were previously seen at a volcanic lava spa in Tokyo at the end of January.

When asked about the nature of Hirosue and Sato's relationship, both agencies denied that they were having an affair and Sato's agency also commented that she was just a respected senior of his.

Hirosue was previously married to model Okazawa Takahiro before they divorced in 2008 and later married candle artist Candle June in 2010. She has two sons from her two marriages. Hirosue and Sato met on the set of 2010 NHK Taiga drama "Ryomaden".

According to the magazine, Hirosue's husband was not in Tokyo on the night she visited Sato because he has been away in disaster-struck areas like Fukushima and Niigata since mid February. In fact, Hirosue was said to have been unhappy about her husband's continued absence from home due to his charity work even though their relationship was believed to be on good terms. Due to the fact that Candle June was not at home most of the time, Hirosue was reported to have complained to her friends that she felt lonely and even suspected why her husband kept going to those areas and if he had someone there who he wanted to meet.

Hirosue and Sato did not have many scenes together in "Ryomaden" thus did not get close during the filming. However, things changed when they were seen chatting happily during the wrap-up party of the drama. Even after the drama ended, some of the cast members would gather for drinks from time to time and it was said that they met up again during one of these sessions.

omg, i will be very upset. coz..my god. she is 33. and he is 24.she is MARRIED and have children, omg Sato, you can find beautiful young girl who will truly loves you. European or Asian - does not matter.
don't do this.
u had better variants.

It's my fault for clicking on this item in the first place but
GOD I HATE THE JAPANESE MASSUGOMI.

Well, there have been no updates since the first report came out and neither side have released further comments regarding this. Usually, when such scandals are reported, how believable the story is depends on how many details are revealed and whether there are photos to back up the claims. I don't know if they are indeed having an affair but the fact remains that the tabloid was able to give such detailed information about their meeting and support the report with photos so I'm inclined to believe that they did meet up on that night. As to whether they are really involved in an affair, that is still a mystery.

I think the report about their January date at the spa was a bit more fishy though. You probably won't go to a spa with an ordinary friend of the opposite sex where you have to strip naked in order to undergo the spa treatment.

Oh please no... *sigh*
This news is too much to handle.
Why does the majority of japanese guys prefers older women?

Is common japanese girl like to fool around behind their husband's back if her heart and body is not well taken of.

Noooo takeru. You don't date a married woman. i hope it's not true.

Is she coming on to him??

Ha I'm an idiot, didn't realise this news was 3 years ago!

Hi junny, I also get a shock at times when I see old stories like this surfacing in the top 10 list of most visited posts. Makes me wonder who are looking at them after all this time has passed? ^__^

On my opinion, Who ever he dates or marries is okay with me. We cannot judge whom ever makes him happy 😊😊😊

Hi! 2020 and I too sneak around for takeru's info. I don’t know if they had any relationship like that but hope for the best future coz as an actor he really is good.

Wow, the news are really in detail. Hope this is not true, if it is then we're not in position to judged.

This wouldn't be happen. They are just friends. That's it. This romure was long time ago but still hits me hard.