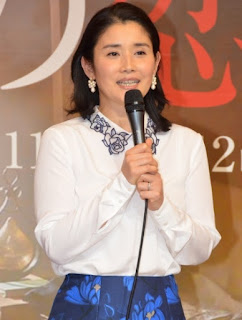 The production press conference of Tokai TV & FujiTV Spring 2017 drama "Yaneura no Koibito" was held on 29 May which was attended by cast members Ishida Hikari and Imai Tsubasa. The drama will begin its run from 3 June in the Saturdays 11.40pm timeslot and marks Ishida's first appearance in a drama series in 14 years.

Ishida plays the lead character Saijo Kinuka who is a housewife and has a 17-year-old daughter and 15-year-old son with her husband. Due to the death of her father-in-law, she moves to a Western-style house in Kamakura left behind by him together with her family. Kinuka finally realises her longtime dream of opening a flower arrangement school by doing it in the salon of her new house. Just when she thinks that her life is already perfect, she is aghast to find her ex-boyfriend Seno Itsuki (Imai Tsubasa) at her housewarming party even though they had parted ways 18 years ago. Although Kinuka manages to chase Seno away that day, strange things start happening in the Saijo household as food is found to be missing from the fridge and her husband's clothing disappear for no reason. It turns out that Seno has started living in the attic of the house and this gradually causes the revelation of secrets hidden by the people around Kinuka including her husband Makoto (Katsumura Masanobu), children, mother-in-law Chizuko (Takahata Atsuko) and best friend Kyoko (Miura Rieko) and leads to her being forced into a corner mentally. When a murder takes place, this then causes her fate to undergo a drastic change.

Ishida commented that as the story is something hardly likely to happen in real life, this makes it more difficult to act and she has been struggling every day. However, thanks to the help of the staff and her co-stars, she has been able to cope with the filming. As for working with Imai, she said that he is like a cute young man who would be serious one moment and get all hyped up talking about baseball suddenly.

On the other hand, Imai said that as his character can be said to be a nuisance, there was nobody he could look to as a reference when acting so he was quite surprised when he saw the script. He joked that as he appears in many heart-stopping scenes, he hopes to gain the title of No.1 Attic Actor after appearing in this drama. It was also revealed that he will be appearing in a belly dance scene with Takahata Atsuko in the drama.

As 25 May was Ishida's birthday, Katsumura who plays her husband in the drama, made a surprise appearance and presented a cake and bouquet of flowers to her together with Imai. When both Imai and Katsumura tried to feed her a bite of the cake, Ishida chose Imai without hesitation which made Katsumura "flare up" at the host who suggested them to do this. Katsumura commented during the event that he had some complicated feelings about Imai being his rival in love this time because they had appeared as a teacher and student in the FujiTV drama "Mokuyou no Kaidan" many years ago. He joked that the student he "nurtured" with care grew up to snatch his wife from him which led Imai to respond that he has no choice because the script dictates that he becomes the third party in their marriage.