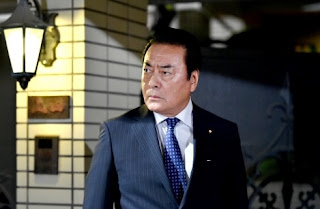 Takahashi Hideki will be appearing in the ongoing TBS Spring 2017 drama "Chiisana Kyojin" which is being shown at 9pm on Sundays. He plays the role of Yamada Isao, the father of Haruhiko (Okada) who is the deputy chief cabinet secretary and holds immense power. However, his relationship with his son is on the rocks as he sees Haruhiko as having not met his expectations. In the story so far, Haruhiko is informed by undercover police officer Eguchi (Yusuke Santa Maria) who has infiltrated the shady Soumei Gakuen and found Isao's name in secret accounting records. This leads Haruhiko to conduct his own investigation into the matter but he ends up being arrested for running away from the crime scene where Eguchi was found murdered.

Takahashi revealed that his first scene in the drama did not feature him saying anything but he actually thinks that this was interesting as it allowed him more room to develop his role. As for working with Okada for the first time, he commented that he was looking forward to the clash of values between the father and son who take different paths in life.