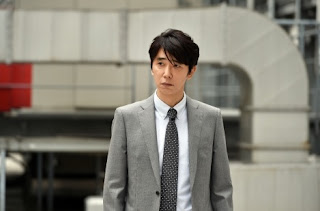 The new cast members in the second half of TBS Spring 2017 drama "Chiisana Kyojin" from Ep 6 onwards has been announced. The next arc focuses on a school Soumei Gakuen which aims to go global by inviting many overseas students and talented students within Japan. However, the school is suspected of having acquired the refilled land which its premises are standing on through illegal methods.

Yusuke Santa Maria will be playing Yabe Takashi who works in the accounting department of Soumei Gakuen. His section chief Yuichi played by Inoue Yoshio goes missing all of a sudden so his worried Ami goes to the police and is assigned to talk to Kosaka (Hasegawa Hiroki) who is transferred to the Toyosu Police Station. Kosaka and Yamada (Okada Masaki) have a new boss Sudo Fumika will be played by Kanno Misuzu while Ishiguro Hideo will play their colleagues Sekiguchi Kazuya. Other new cast members include Umezawa Tomio and Wada Akiko.