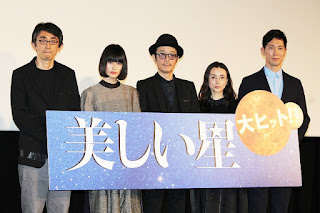 The first-day-screening event of new movie "Utsukushii Hoshi" was held at TOHO Cinemas Nihonbashi on 27 May which was attended by the director Yoshida Daihachi and cast members Lily Frankie, Kamenashi Kazuya, Hashimoto Ai, Nakajima Tomoko and Sasaki Kuranosuke. The movie is based on a science-fiction story published by Mishima Yukio in 1962 and adapted by the director for this movie which features the Osugi family that awakens to their true selves of being aliens from other planets. The father (Lily) becomes an alien from Mars while the son (Kamenashi) becomes an alien from Mercury and the daughter (Hashimoto) becomes an alien from Venus. However, the mother (Nakajima) remains as an earthling and doesn't understand why. Sasaki plays a mysterious alien who gets close to the Osugi family.

The director Yoshida revealed that he first read the novel more than 30 years ago and had thought lightly about making it into a movie. As such, to be able to assemble such a wonderful cast and to see that the movie is finally ready to be seen by the audience, he felt really happy and gratified. Frankie "complained" that the director gave him a rare character of a father this time and that he had a lot of information to process before he could prepare for his role who happens to be a Martian and weather forecaster at the same time. He also joked that the director's idea of aliens was so old-fashioned that it wouldn't have been surprising if they were made to wear an octopus costume

With regard to Hashimoto who plays his daughter, Frankie said in jest that she has a mysterious air surrounding her and when she cut her hair short, it felt as if she had the power to call a UFO to come and pick her up. Kamenashi chipped in to reveal that Hashimoto was the first to react to the presence of a cow which appeared at the filming location which she admitted to frankly and said that she loves big animals compared to human beings.

When asked about his character, Kamenashi commented that when people watch the movie, they might not notice his presence at the beginning as he tried to conceal his usual image as a performer and Johnny's artiste through his acting. As such, he thanked the director's guidance for being able to do that.