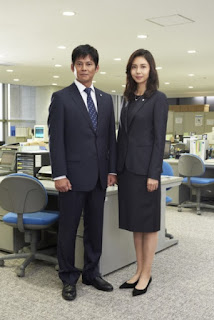 Matsushima Nanako will be appearing in the new WOWOW drama "Kansayaku Nozaki Shuhei" starring Oda Yuji which will begin its run from 14 January in the Sundays 10pm timeslot. The drama which consists of 8 episodes, marks the first collaboration in 17 years for Oda and Matsushima since the 2000 movie "White Out".


The story which is based on the same-titled manga by Shuu Ryouka and Noda Shigeru, is set in the late 1990s when the bubble economy had collapsed, the economic environment was characterised by negative news of banks hiding bad debts, politicians using their power to get involved in corruption and professional sokaiya i.e. individuals who were hijacking shareholder meetings and blackmailing companies. Amid such tough circumstances, Oda plays the role of Nozaki Shuuhei who used to be the branch manager of Aozora Bank and is promoted to become an auditor and has to assess whether the directors are discharging their duties in a fair manner. He comes to find out about some misdeeds within the bank and must deal with the evil with his sense of justice and compassionate ways when dealing with people. Co-stars include Furuya Ikkou who play the head of the bank Kyogoku and has deep ties with the politicians and Kishitani Goro who plays Takeda, the managing director in the bank known for his pushy ways of doing things.

Matsushima plays Tachikawa Shoko who is the first branch manager in Aozora Bank's history and aspires to rise up the corporate ladder while making use of her superiors in order to get ahead of her competitors. She gets close to Nozaki with the intention of using him as her stepping stone to success.

As this is Matsushima's first appearance in a WOWOW drama, she commented that a story like this is something typical of WOWOW's productions and she finished reading the script at one go because she was interested to find out what happened next. Due to the time setting of the story, her character who was such an ambitious woman and would stop at nothing to get ahead was considered very rare in that era so she would try her best to portray this character. As for working with Oda again after 17 years, she expressed her excitement about their collaboration. Oda also echoed her view especially since they did not have many scenes together in the movie 17 years ago.

Wow can't believe they've only worked together once before.