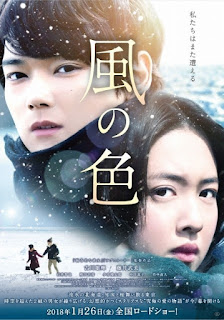 Furukawa Yuuki and Fujii Takemi will be starring in the new movie "Kaze no Iro" (The colour of the wind) which is directed by South Korean director Kwak Jae-yong and due to be shown in cinemas from 26 January 2018. Co-stars include Ishii Tomoya, Hakamada Yoshihiko, Koichi Mantaro, Nakada Yoshiko and Takenaka Naoto. Takei was selected from an audition involving 10,000 people.


The movie is set is Shiretoko in Hokkaido and Tokyo where two pairs of men and women are embroiled in a mystery love story. Furukawa plays Ryo, a guy who lives in Tokyo and heads to Hokkaido to look for his girlfriend Yuri (Fujii) who had disappeared 100 days ago. During the journey, he bumps into a magician Ryu (also played by Furukawa) who looks exactly like him and another woman Aya (also played by Fujii) who looks like Yuri. This causes Ryo to be involved in a series of unimaginable incidents as he continues his search for Yuri.