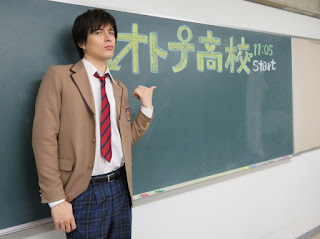 Shirota Yu will be the guest star in Ep 4 and 5 of TV Asahi Autumn 2017 drama "Otona Koukou" which will be shown on 4 Nov and 11 Nov. He will be playing the prime minister's 30-year-old son Iwashimizu who is still a virgin and is forced to attend Otona Koukou with the other virgins above 30 years old played by Miura Haruma, Takahashi Katsumi and Kuroki Meisa etc because his father wants him to become a real adult. However, Iwashimizu disregards the school rules and refutes the teachings by the teachers with his logic while remaining fixated and interested only in piano playing.


Shirota commented that as he is close friends with Miura and Kuroki in real life and he had acted in a school drama with Miura before, he felt a tinge of nostalgia to be wearing a school uniform in the drama and that it made him feel young again. As such, he enjoyed the filming very much although he had to imagine how to act as Iwashimizu since he is neither the prime minister's son nor a virgin in real life. Shirota also revealed that although he is playing a pianist in a new movie due to be shown in cinemas next year and that he used to say that he was good at playing the piano, he actually isn't that good at it. As such, he was having reservations as to whether he should take up the role of Iwashimizu since he wasn't sure if he could handle the piano playing scenes. However, since Miura and Kuroki are in the cast, that was what led him to accept the offer. He also revealed a funny episode on the set as Kuroki always called him Yu-kun in private but switched to calling him Shirota-kun during the filming. This made the two of them feel really awkward as they joked that it made them "sick" to be so polite to each other.